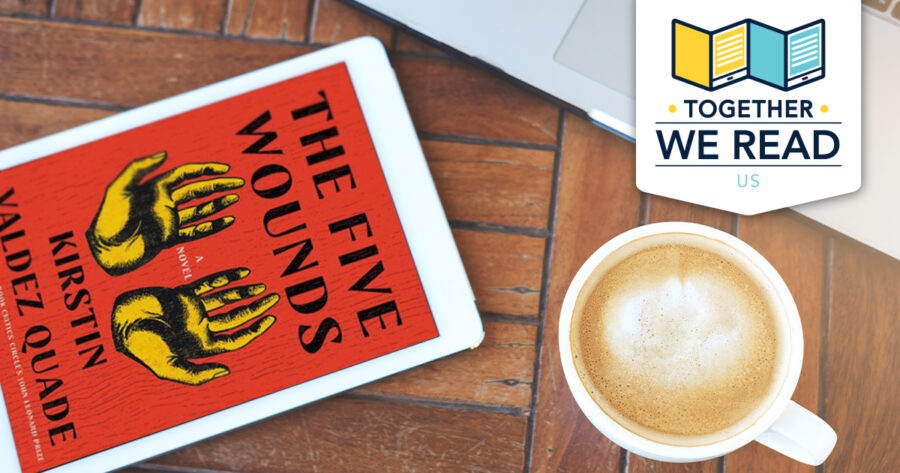 During Together We Read from OverDrive, borrow The Five Wounds for free with no waitlists and no holds from February 7 through February 21!
Download Libby or visit OverDrive to borrow the eBook or audiobook from HCPL using your phone or tablet.

It’s Holy Week in the small town of Las Penas, New Mexico, and thirty-three-year-old unemployed Amadeo Padilla has been given the part of Jesus in the Good Friday procession. He is preparing feverishly for this role when his fifteen-year-old daughter Angel shows up pregnant on his doorstep and disrupts his plans for personal redemption. With weeks to go until her due date, tough, ebullient Angel has fled her mother’s house, setting her life on a startling new path.

Vivid, tender, funny, and beautifully rendered, The Five Wounds spans the baby’s first year as five generations of the Padilla family converge: Amadeo’s mother, Yolanda, reeling from a recent discovery; Angel’s mother, Marissa, whom Angel isn’t speaking to; and disapproving Tíve, Yolanda’s uncle and keeper of the family’s history. Each brings expectations that Amadeo, who often solves his problems with a beer in his hand, doesn’t think he can live up to. 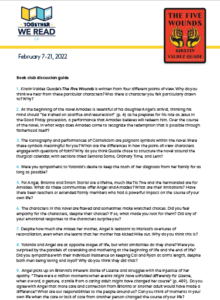 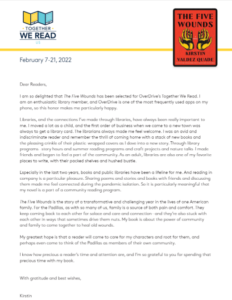 Kirstin Valdez Quade is the author of The Five Wounds, which is currently shortlisted for the Center for Fiction’s First Novel Prize and the Carnegie Medal for Excellence, and is longlisted for the Aspen Words Literary Prize. Her story collection, Night at the Fiestas, won the John Leonard Prize from the National Book Critics Circle, the Sue Kaufman Prize for First Fiction from the American Academy of Arts and Letters, a “5 Under 35” award from the National Book Foundation, and was a finalist for the New York Public Library Young Lions Award. It was named a New York Times Notable Book and a best book of 2015 by the San Francisco Chronicle and the American Library Association. Kirstin is the recipient of the John Guare Writer’s Fund Rome Prize from the American Academy in Rome, a Rona Jaffe Foundation Writer’s Award, a grant from the Elizabeth George Foundation, and a Stegner Fellowship at Stanford. Her work has appeared in The New Yorker, The Best American Short Stories, The O. Henry Prize Stories, The New York Times, and elsewhere. She is an assistant professor at Princeton.