Winter is here! Book recommendations for 6 of our favorite “Game of Thrones” characters 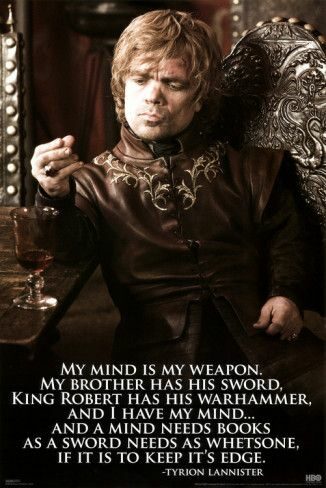 Over the past seven seasons of “Game of Thrones” we’ve had to say goodbye to a lot of characters. A LOT of characters (thanks, George). Yet, here we are at the beginning of Season 8 and we still have several contenders for the Iron Throne, along with other beloved (and not-so-beloved) characters hanging around Westeros.

Shouldn’t we wonder about what the characters will do after this is all over (presuming, of course, they make it through). How are they going to fill all that time once they no longer have to worry about White Walkers and waging war? Here are books that we would recommend to some of our favorite characters from “Game of Thrones.”

Cersei Lannister
Wicked: The Life and Times of the Wicked Witch of the West by Gregory Maguire
We almost suggested Flowers in the Attic, but that felt a little too obvious. Instead, we’ve selected Gregory Maguire’s inventive narrative that explores the rise and fall of Elphaba, the green-skinned witch we commonly know as the Wicked Witch of the West. From the beginning, it is made clear to the audience that we are supposed to view Cersei as a villain. Likewise, the Wicked Witch of the West was originally only ever seen through the eyes of Dorothy Gale. But what if both are merely victims of bad editing? In his book, Maguire gives us a different perspective on a character always seen as a “bad guy” and makes us question everything we thought we knew about good versus evil.

Tyrion Lannister
The Wars of the Roses by Dan Jones
When writing his series, George R. R. Martin took inspiration from England’s historical Wars of the Roses. Royal families! Feuding for the throne! The name for the wars comes from the fact that the two rivals each had a rose as their sigil: a red rose for the House of Lancaster (sounds an awful lot like Lannister, doesn’t it?) and a white rose for the House of York (oh, kind of like Stark, huh?). At the of the violent and bloody civil wars, England was left with the House of Tudor, which had a red and a white rose as its emblem. Red and white. Fire and ice. For Tyrion, we would advise he brush up with some nonfiction if he hopes to survive and make sure history doesn’t repeat itself.

Jon Snow
Inheritance: A Memoir of Genealogy, Paternity, and Love by Dani Shapiro
In 2016, novelist Dani Shapiro submitted her DNA to a genealogy website for analysis. Done on a lark, she wasn’t expecting much to come of it, so when the results came back and Shapiro discovered her father was not her biological father, her entire world was turned upside down. Jon has spent his entire life in the dark about his mother — his father Ned Stark refused to tell him anything about her. But as longtime readers of the books have suspected, the truth about Jon’s heritage is far more complicated and earth-shattering than anyone truly realizes.

Arya Stark
Furyborn by Claire Legrand
Legrand’s first book in her Empirium Trilogy tells the story of two fiercely independent women 1,000 years apart who together have the power to either save the world or destroy it. In particular, it is Eliana’s story that would most likely appeal to Arya. A bounty hunter, Eliana considers herself unstoppable. But then her mother vanishes and Eliana is forced to join a rebel faction in order to find her. Arya is a fighter who never fit in with the grandeur and glitter of court, and she is separated from her home and her mother very early in the series. So much of her story is about finding her way back home by any means necessary, even if it means aligning herself with figures she never expected.

Daenerys Targaryen
Circe by Madeline Miller
For the Mother of Dragons, we’ve selected Madeline Miller’s retelling of Circe. In Greek mythology, Circe is a sorceress briefly seen on the journey of Odysseus where she turns men into swine. Daughter of the sun god Helios, Circe is banished to a remote island where it was rumored that she was surrounded by beasts unseen anywhere else (does that include dragons?). Ultimately, Circe is the story of one woman’s rise from the ashes of exile who refuses to back down when men and gods stand in her way. Surely that’s something Daenerys Stormborn of House Targaryen, First of Her Name, the Unburnt, Queen of the Andals and the First Men, Khaleesi of the Great Grass Sea, Breaker of Chains, and Mother of Dragons can appreciate.

Previous Post6 Book Recommendations for the Avengers
Next PostNew at HCPL: wireless printing!